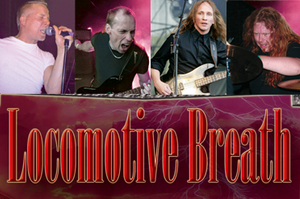 In 1995, when Overdrive had folded (again), Janne teamed up with his former Overdrive colleague, Kjell Jacobsson and they formed a new band. They drafted drummer Mats Brandström (T For Trouble) and bass player Ulf Kronsell (E-Type, Blue Town) and were soon completed with singer Herman Saming (A.C.T). The band entered Studio Underground with producer Pelle Saether and recorded their first demo in 1997.

The band was soon picked up by German label, BlueStone Records. During the recordings of the band’s debut album, “Train Of Events”, the band parted ways with Kjell and his solo parts were instead recorded by guest guitarist Mattias Ia Eklundh (Freak Kitchen). The album was also released on Bareknuckle/Avex in Japan in 1998. The band also recorded some covers for tribute albums for Captain Beyond and Thin Lizzy, plus Europe for a tribute to Swedish metal. Since Herman became more and more busy with A.C.T he left the band and was replaced by Mattias Osbäck (Painkillaz) who made his debut, together with drummer Jimmy Lexe, on the second album “Heavy Machinery” in 2002. The CD was soon re-issued with one bonus track (a cover of US hard rockers Target) on the newly established Sweden Rock Records. The band also played Sweden Rock Festival this year.

In 2003 Rivel Records re-issued the debut album with some demo tracks as bonus and in 2004 the band recorded a cover of “Into The Night” for a tribute to The Sweet. More changes in the line-up lead to the third album, “Change Of Track” (2005), featuring only Janne from the original line-up, Mattias on vocals and new drummer Ted Wernersson (Mandrake Root). The bass work was handled by Marcel Jacob (Talisman, Rising Force) and released on Lion Music. A live line-up featured Janne, Mattias, Ted, bass player Mats Staa Pettersson and guitarist David Blomé. A temporary line-up featuring Janne, Mattias and drummer Peter “TrumPeter” Svensson (Overheat, Mercy, Faith) recorded a new track for the benefit CD for Japan’s tsunami victims, “Embrace The Sun” in 2011, and it was also this line-up that recorded the song "Mörrum Ka'" under the name The Kaars a chant for a local hockey team.

The train is still held up at the station...