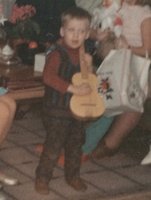 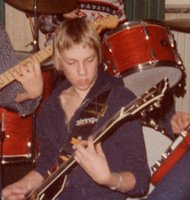 Janne was born in 1963. He became inspired by his mother playing acoustic guitar and quite early on started playing around with it. He became interested in music quite early on, with his first real favorite song being rock n roll number “Let’s Dance” by Ola & The Janglers. Later on his cousin Percy introduced him to The Sweet, which soon became his favorite band. Around 1974 he was introduced to heavier bands like Montrose, Deep Purple, Rush and Black Sabbath. Around the age of 9 he bought an old Hofner bass from a friend and started playing around with it. After having seen BB King on TV, play a classic two-finger power chord, a whole new world opened! He wanted to take guitar lessons, but to play guitar you first had to play the recorder to learn how to read music. After 3-4 weeks Janne was bored to death, quit playing the recorded and bought a guitar course on cassette. He learned some basic cords and then went straight to the finale: “Guitar Boogie”. He started learning from playing to records by his favorite bands, such as The Sweet, Slade, Montrose, Nazareth, Black Sabbath, UFO, Deep Purple, Thin Lizzy etc.

He started playing with a couple of friends and the band was called “Sgt Pepper’s One And Only Lonely Hearts Club Band”, short and sweet. Just like their one-gig career. His best friend, Pellle Thuresson, also bought a guitar and started playing. The two formed their first band: Blue Marlin, which became Flash, now featuring Janne on guitar (a Sakai Les Paul copy), Pelle on vocals and guitar, Ola Persson (now Calle Engelmarc) on bass and vocals and Janne Gummesson on drums. They played covers of Scorpions, Budgie, Sex Pistols etc. After a few gigs under the name Flash early 1978, they went for the heavier sounding TNT, now doing covers by bands like Budgie, Moxy and Sex Pistols (yes, the punk had a certain effect as well). The band was reinforced by keyboardist Magnus Petersson, and in January 1978 they recorded a demo. After some changes the band transformed into Paradize in December 1979, a band more influenced by melodic bands like Styx, REO Speedwagon, New England, Marsseille, Magnum etc. In 1980, they released their first (and only) vinyl single, released by the band themselves in 250 copies. In 1980 Janne and Ocean drummer Kenta Svensson forms Overdrive.

1996 “The Encyclopedia of Swedish Hard Rock And Heavy Metal 1970-1996” is released and Locomotive Breath is formed. Overdrive’s “Metal Attack” and “Swords And Axes” are re-issued on CD for the first time.

2006 Overdrive “Resurrected” is released. Mountain of Power “Volume One” is released. Planet Alliance is released. Starts writing for Metal Central. Does artwork for Neon Rose re-issues.

2007 Records an (still unreleased) album with Teenage Rampage, where some songs appeared on compilations. Guest spots for Chris Catena. Mörrum’s Own and The Kaars released. Song by John Garner’s Sir Lord Baltimore appear on compilation.

2009 Constancia “Lost And Gone” is released. Appears on “Shredding Across The World Vol 2”. Guest spots with Alyson Avenue and Grand Design.

2011 Overdrive and Locomotive Breath records each a track for a benefit CD for Japan. Guest spot for Grand Design. Overdrive “Angelmaker” and “The Angelmaker’s Daughter” are released.

2013 Janne joins Grand Design and “Baby It’s You” is released. Guest spots with Thomas Bergsten’s Fantasy and Peter Hermansson. Overdrive plays in Japan. Overdrive “Let The Metal Do The Talking” is released on vinyl.

2014 Grand Design “Thrill Of The Night” is released. Guest spots on release by Rocka Rollas.

In 2004 Janne and the boys in Locomotive Breath played a show together with former Samson singer Nicky Moore, as a tribute to Paul Samson. 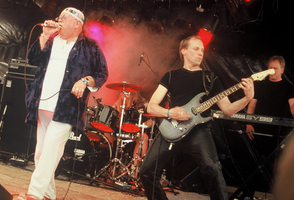 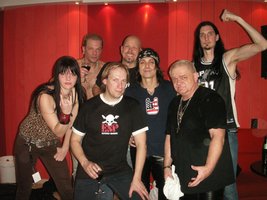 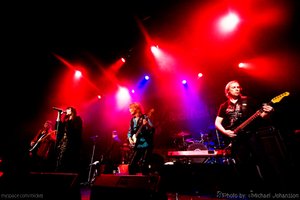