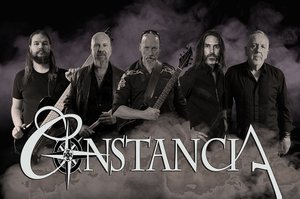 It all started in 2007, as the brainchild of former Scudiero/Token keyboard player Mikael Rosengren. He had written a bunch of songs that he wanted to record. He got in touch with guitarist Janne Stark (Overdrive, Grand Design, Locomotive Breath etc) and asked him to lay down some guitars. Janne loved the songs and got more and more involved in the process, and the seeds of Constancia were sown. They now felt it was time to get a full band together. Janne contacted drummer Peter “TrumPeter” Svensson (ex-Mercy, Faith), with whom he had worked in Overheat, Locomotive Breath and Mountain of Power. Mikael drafted Jaded Heart bassist Michael Mueller, and they tried out various vocalists before finding David Fremberg (Andromeda, Truth, Time Odyssey). They overcame the vast geographical distances, with Mueller living in Germany, and the debut album “Lost And Gone” saw the light of day in July 2009 on Frontiers Records.

In 2013 the work process for the band’s second album started. Since Michael Mueller was busy with other musical projects the band had to find a new bass player. Enter Linus Abrahamson, also a member of Andromeda. Instead of rushing out a new album, the band let the process take some time and the band spent 2013 and most part of 2014 working on the songs, recording and mixing. The second album “Final Curtain” was released in 2015, in a “standard” version, as well as a limited editon (300 copies) “Special Edition” featuring 3 bonus tracks. Unfortunately this version has been counterfeited and fake copies are floating around (the real one has “Made in Australia” printed in the center of the disc).

In 2019 the band started working on the 3rd album. When the music was more or less done and it was time to start recording vocals, David Fremberg gracefully bowed out due to too many other commitments. The band soon found Brit Pete Godfrey (In Faith, Blood Red Saints), who did an outstanding work writing new lyrics and coming up with vocal melodies, turning "Brave New World" into a new album, even for the rest of the band. The album was soon picked up by German label Pride & Joy, which released it in June 2021. A ltd edition LP was also released by the band.