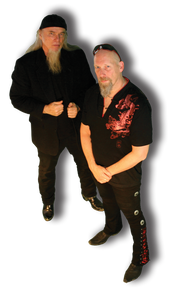 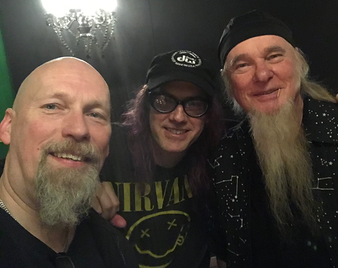 It all started when Janne was recording his third Mountain of Power album “Volume Three”. He decided to merge the two songs “Kryptonite” and “Give It Everything We Got” by Neil Merryweather. Janne got in touch with Neil, asking if he thought it was ok. It ended with Neil singing two tracks on the album (not his own songs, though).

This then sparked further collaboration and Janne sent Neil a track he had written. It didn’t take more than a few days before Neil had written vocal melodies and words for the song. This was “Babylon Sin City” and now things just started rolling. Janne went to visit Neil at his home and studio in Las Vegas and the two hit it off great! More songs were written, both by Janne and Neil, and they started talking about doing an album together. The drums on the album are handled by Janne’s long time companion (even from back in the late 80s and Overheat, later in Locomotive Breath and also on the Mountain of Power albums) Peter “TrumPeter” Svensson.

The band was sigend by GMR Records in 2017 and the digital debut single "Freedom To Love" was released on Nov 24. The album, "Carved In Rock" was released on CD and digital on January 26, 2018 followed by a double vinyl release.

In 2019 Neil and Janne started working on the second album "Rock Solid", and on this album they brought in Michael maysonet on drums. The album was finalized and released on GMR Music on LP and CD in 2020.

During the recording of "Rock Solid", when Janne was in Las Vegas, the two also met drummer John Wackerman. They ended up in Skeleton Key recordings and in 2.5 days they wrote and recorded the basics for 10 tracks! The songs were finalized during 2020 and 2021, but before the album was mixed and finished, Neil sadly passed away from a brain tumour in 2021. The album "Cosmic Affect" was released under the name Merryweather Stark Wackerman in 2022.