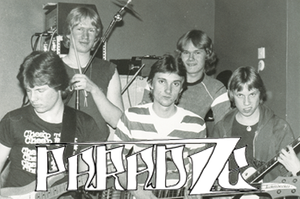 IThe band was formed in December 1979 from the two local groups Silencium and TNT.

The band’s only release, a 7” single entitled “Caress Of Steel/Coming Home” was released by the band itself in 250 copies early 1980. ORI Record was only a studio, not a label.

The band was at the time influenced by groups like Styx, REO Speedwagon, Magnum etc. The band split on August 9, 1980, when Janne, Kenth and Pelle joined forces with two members of Ocean to form Overdrive.  Paradize played mostly covers, for example "Blue Collar Man" (Styx), "Back On The Road Again" (REO Speedwagon), "My Number" (Girl), "Sweet Thing" (Goddo), "P.U.N.K" (New England), "Davy's On The Moad Again" (Manfred Mann's Earth Band) and "Rock You Tonight" by Marseille.