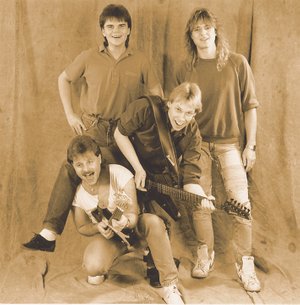 In June 1985, Overdrive started folding because our singer, Pelle Thuresson, quit singing and quit the band to become a bass player. We had also been ripped off by our record label and didn’t have a deal. We recorded a new rehearsal demo, but nothing really came out of it and we finally called it quits. Me and Pelle go way back to primary school, so it was natural for us to continue and to form a new band. We jammed with various drummers, but in December 1985 we talked to former Turbo/Mercy drummer Paul Gustavsson, who had just left the band High Voltage, if he’d be interested in joining us. He was. We started playing some covers, apart from Black Sabbath’s “Symptom of the Universe”, it was a bit more obscure stuff, such as Billy The Kid’s “When Hell Freezes Over”, Diamond REO’s “All Over You” and the demo

only track “Nothing Ventured, Nothing Gained” by Q5. We immediately also started writing our own songs and going through my rehearsal tapes, I have one from January 18, 1986 that features songs like “Eyes Of Ice”, “Sinister Warfare” (written when I was in Overdrive), “Overheat”, “I Wanna Know”, “Mean Dream” and “Rainbow Riders” (a local motorcycle club).

Between January 1980 and December, the same year we wrote and recorded (at rehearsals) over 30 songs!! In November 1986, singer Gernot Iversen (also ex-High Voltage) joined the band. In February 1987, we recorded a 4-track demo, featuring “Fight To The Finish”, “Realm Of Freedom”, “The Chains” and “Mean Dream”. It was a really simple porta demo made in our rehearsal studio. We didn’t do that much with it, but instead kept writing and rehearsing. Between May-June 1987, we recorded our second demo, containing re-recordings of “Realm of Freedom” and “Fight To The Finish”, plus “I Do Believe”, “High On You” and the instrumental “L.J.M.S.” (an ode to my first born daughter). We only did one live show, together with Interaction, in February 1988. Unfortunately, both Paul and Gernot got jobs far away, which put an end to our collaboration in 1988. Later the same year we drafted another former Mercy drummer, Peter “TrumPeter” Svensson, who was also in the band Faith. We kept writing and recording rehearsal demos like crazy. We didn’t have a singer, and we just couldn’t seem to find one. I however did write lyrics for very song we did. There were songs like “I Wanna Be (God)”, “In The Lap Of Destiny”, “Back To Basics”, “Die For Love”, “In The Line Of Fire” etc. The style was quite groovy, riff-oriented heavy rock with a bluesy touch.

Early 1990, Peter left the band and we drafted singer/drummer Håkan Windahl (Interaction). Before Peter left, we recorded a 12-track demo, but it was never finished with vocals. Listening back to it, the song “Solitude” is probably the most blatant rip off of Captain Beyond’s “Can’t Feel Nothing” I’ve ever heard. A good thing we didn’t finish it. The track “Triumvirate” came from this session. With Håkan in the band, we kept on writing songs, but never managed to drag our asses into a studio to record a proper demo, even though we had loads of songs (at this stage some 60+) to choose from. We slowly started losing interest and late 1992 we started talking about putting Overdrive together

again. So, me, Pelle (now on bass) and drummer Kenta Svensson, from the original Overdrive line-up, drafted singer/guitarist Jörgen Miller and resurrected Overdrive. In 1993, we recorded the demo “Back To Basics”, featuring some of the songs I had written during the Overheat era.