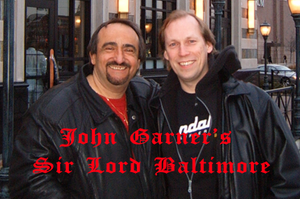 Janna again went over to John and this time they had a bass player (whose name escapes me). The three put together a set of classic Sir Lord Baltimore songs such as “I Got A Woman”, “Hard Rain Falling”, “Kingdom Come”, “Woman Tamer”, “Master Heartache”, “Ain’t Got A Hung On You” and “Ceasar LXXI”. Some shows were booked in Sweden, for instance the Sweden Rock Festival 2007, but unfortunately, due to economic reasons John decided he couldn’t do it. Janne and John continued working on new songs together, but unfortunately nothing came out of it and the whole thing fizzled out.

John tragically passed away in 2015. Besides the new version of “Woman Tamer” the two also put together an, as yet, unreleased, jam track.

As the recording of "Woman Tamer" was meant for Mountain of Power, Janne in 2020, decided to re-record the guitars and bass and give the song a proper (as intended) release. The song is featured on Mountain of Power "Volume 4", as a tribute to John.